Hundreds of black clad pro-democracy demonstrators outside Hong Kong’s High Court on Wednesday chanted “Liberate Hong Kong, revolution of our times”, as a leading activist appeared to appeal a six-year jail sentence for rioting in 2016.

The court’s walls were scrawled with graffiti reading: “History will absolve us”, “If we burn you burn with us” and “No turn back 4HK”.

The Asian financial hub is struggling to recover from a weekend of violent clashes between police and tens of thousands of protesters, with parts of the city virtually cut off due to a paralysed metro that was a target of vandalism.

Hong Kong The Burning of Babylon?

Chemicals missing from laboratories of universities

Scores of shops were boarded up after also being trashed or torched, and more protests are expected in coming days. Some streets were littered with broken glass and twisted metal debris from the protests.

The protests started four months ago in opposition to a now withdrawn extradition bill that would have allowed suspects to be sent to China, but have broadened into a pro-democracy movement amid fear that Beijing is undermining Hong Kong’s “one country, two systems” formula, which gives residents greater freedom than mainland Chinese.

The unrest is the worst political crisis since Britain handed the city back to China in 1997 and the biggest challenge to President Xi Jinping since he came into power in 2012.

Edward Leung, 27, one of the leaders of a movement advocating independence from China, and two other activists, in 2016 received the harshest sentences handed down to pro-democracy leaders since the city returned to Chinese rule.

In his appeal, Leung’s lawyer argued his sentence was disproportionate to his offence, citing other more violent protesters receiving lighter sentences. His case was adjourned on Wednesday ahead of judgment.

Outside the court hundreds of protesters wore black masks in defiance of colonial-era emergency laws banning face coverings, which were brought in on Friday to quell the unrest but which have incited more violent protests.

Hong Kong’s embattled leader Carrie Lam on Tuesday did not rule out asking Beijing for help to end the unrest, with Hong Kong’s economy hit hard by the protests and facing its first recession in a decade.

A slew of international events and conferences due to be held in the city have been cancelled, with the organisers of the Hong Kong Squash Open the latest, stating they were postponing the event “in view of the current situation”.

More than 200 shops and public utilities had been damaged in the weekend’s violent clashes. More than 100 restaurants have closed in the past month, putting around 2,000 people out of work, a representative from an association of catering professionals told public broadcaster RTHK on Wednesday.

Authorities have described protesters as “militant activists”, but many Hong Kong residents are also angry at the emergency powers, fearing their civil rights could be eroded.

More than 2,300 people have been arrested since June, while two teenagers have been shot and wounded in skirmishes with police. Scores of people, including police, have been injured.

China has cancelled broadcasting NBA basketball games after an executive of the U.S. National Basketball Association team the Houston Rockets backed protesters in a tweet. Chinese sponsors and partners have cut ties with the NBA. [nL3N26U0K6]

The NBA’s business in China is worth more than $4 billion, according to Forbes. [nL2N26S0S8]

“Every American has the right to voice their support for democracy and human rights for Hong Kong. Full stop,” said one-time U.S. presidential candidate and former First Lady Hillary Clinton on her official Twitter account on Wednesday. 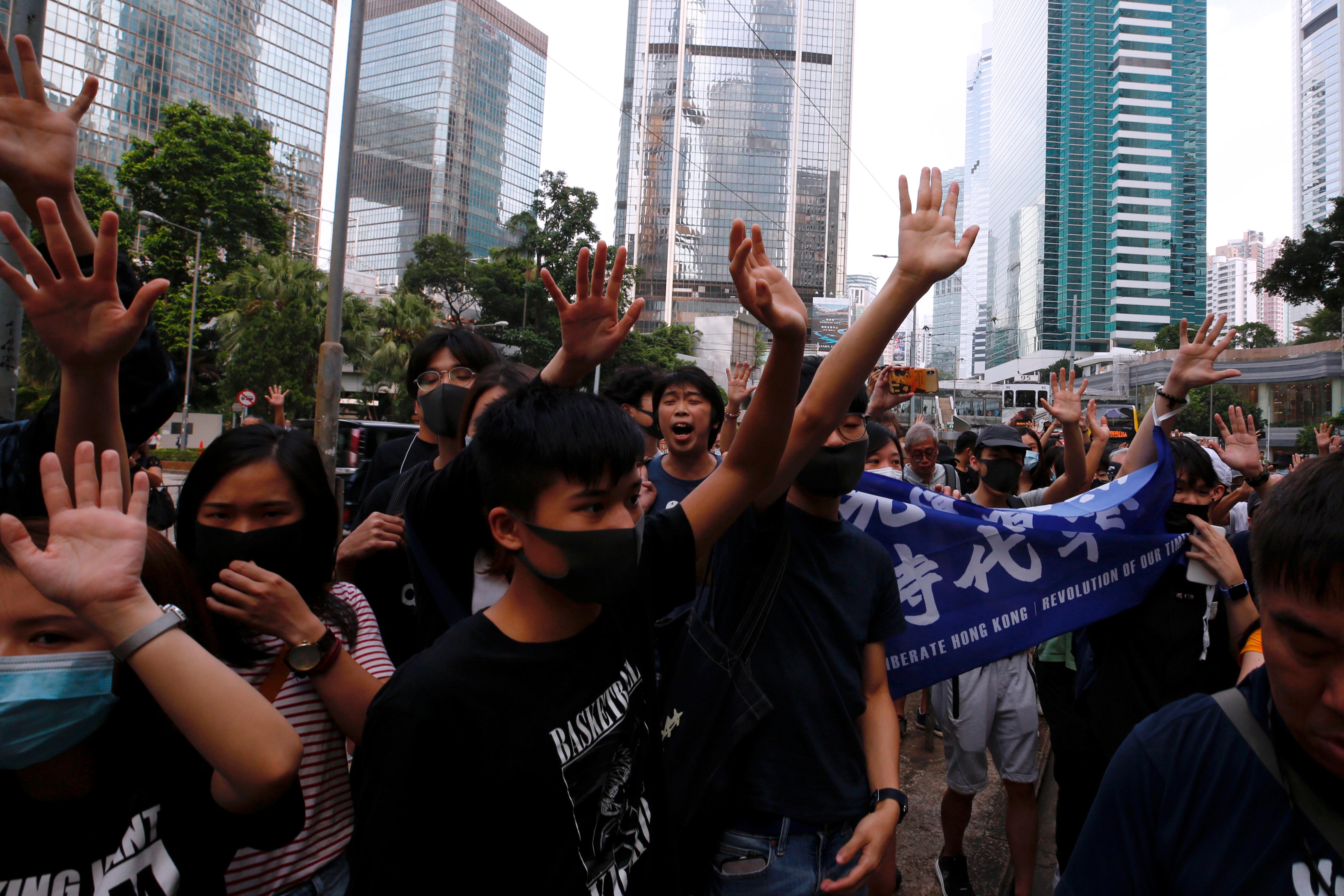 In a separate case, a top online gamer from Hong Kong who showed support for the protests was removed from an international tournament he won, forcing him to forgo prize money that media reports put at $10,000.

Blizzard Entertainment, via their brand Hearthstone, said the gamer identified as “Blitzchung” had violated rules and would not be allowed to play in any Hearthstone e-sports games for the next 12 months.

China has warned foreign governments to stay out of the protests which they deem as an “internal affair” and have accused some, including Britain and the United States, of fanning anti-China sentiment.